With the recent horsemeat scandal and a number of other stories in the press casting doubt on where our food comes from and what it actually is, it’s not surprising that a number of people are now considering vegetarian and even vegan diets as the way forward. Some of my friends have been doing this for a while, but the longest serving vegetarian/vegan I know has to be my friend Joan Court – who became vegetarian as a teenager some 77 years ago, and is also a confirmed vegan.

Local author Joan explains that the United Nations have said a global shift towards a meat-free and dairy-free diet is necessary if we want to be able to eat sustainably in the future and reduce the impact of climate change; and a look at some of the UN figures that have been published in recent times also suggest that over a third of the food produced globally goes to waste – which sounds bad enough in itself, but even more worrying when you consider that food production accounts for 70% of our freshwater consumption, 80% of deforestation and 30% of greenhouse gas emissions.

Mahatma Gandhi – who Joan worked alongside in the 1940’s – suggested that vegan diets are beneficial for our own health:
“It is very significant that some of the most thoughtful and cultured men are partisans of a pure vegetable diet”
…and vegetarian and particularly vegan diets are, of course, kinder to animals – something Joan is all too keenly aware of. After moving to Cambridge in the late 1970’s to study social anthropology, she co-founded Animal Rights Cambridge – the longest serving animal rights group in the UK. They hold regular monthly meetings in the Mill Road area and have been involved in a number of local and national animal welfare campaigns – from persuading the Michelin starred Midsummer House restaurant to remove foie gras from its menu, to campaigning against live animal exports.

Joan’s latest book, Animals Betrayed, features interviews with a number of animal rights activists across the UK. It gives an insight into many of the issues faced by those campaigning for animal welfare and also sheds some light on why some of them first chose to become vegetarian/vegan. Some of those interviewed also talk about animal consciousness – a topic that has been the subject of much research and debate in recent years, including at the 2012 University of Cambridge conference ‘Consciousness in Human and Non-Human Animals‘.

Joan will be signing copies of her book at the RSPCA Bookshop on Mill Road on Saturday – 30th March – between 2 and 5pm. If you can’t make Saturday but would still like a copy of the book (published by Selene Press and priced £12.50) it’s available via Amazon or by phoning (01223) 311828. Joan will be happy to talk about a host of animal welfare issues on Saturday, so it’s a great opportunity to find out more …and she might even share her tips on the best Mill Road places to do a vegan food shop!

January can often be a month of ‘staying in’, following on from Christmas excesses (both financial and dietary!); and with the cold weather here for a while longer, what better than to curl up with a good read. The Mill Road area has been blessed with a few local authors, at least three of whom have recently published books…

Local resident Tom Morgan-Jones is an award winning illustrator. I first met Tom a few years ago when he was visiting my friend and neighbour with whom he had co-created the board game ‘War On Terror’ (great fun to play, though I think my parents were a little taken aback when I bought it for them as a Christmas present!) and since then he has worked on numerous projects. His work can be seen in all manner of places and one of his most recent publications is ‘Mission: Explore Food’, which he both co-authored – along with other members of the Geography Collective – and illustrated. The book aims to change the way children think about food and teaches them everything from growing food and cooking it to eating and food waste. It’s a family book and includes over 150 ‘missions’ for children to complete. Tom has lived just off Mill Road for over fifteen years now and whilst doing his research for the book he spoke to local butchers Andrew Northrop’s. He tells me that they were extremely helpful and really helped the book to become what it is – so where better to get your copy than on Mill Road itself! ‘Mission: Explore Food’ written by The Geography Collective & illustrated by   Tom Morgan-Jones. Hardback, available from Andrew Northrop’s (114 Mill Road, CB1 2BQ) priced £20. Also available to order online via the Guardian Bookshop. 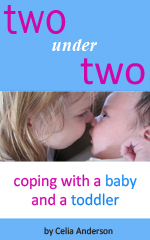 Celia Anderson is a writer and web designer who runs her own copywriting business in Devon, but her roots are firmly steeped in Cambridge and she has lived on Mill Road itself – in fact she describes herself as somewhat of a Mill Road fanatic (and I know she still misses the Black Cat Café!). I have known Celia for many years though have not seen her for a while – during which time she has had two children (where does the time go!). Combining her love of writing with her new-found experience of motherhood inspired her to start her blog – 2under2 – back in 2012. This has been hugely popular and so she has now published a digital book all about her experiences – ‘Two under two: coping with a baby and a toddler’. It’s a personal and empathetic guide to coping with a toddler and a newborn and has plenty of useful tips as well as interviews with other parents of two under two.
‘Two under two: coping with a baby and a toddler’ by Celia Anderson. Available for download on Amazon, priced £5.73.

Joan Court is a local writer and campaigner with a passion for animal welfare. She lives in the Mill Road area and is a confirmed vegan and cat lover who is very much part of her local community. I first met Joan some time ago and she is one of the most active people I know (which considering her 93 years, puts many of us to shame!). Although much of her time is currently taken up with running campaigns for Animal Rights Cambridge (which she co-founded in the late 1970’s), she has had a varied career that has seen her work as a district midwife in wartime London, witness Indian independence, attend fasts with Mahatma Gandhi, pioneer birth control in Pakistan, retrain as a social worker and at the age of 86 become a crew member on the Farley Mowat (as part of Sea Shepherd) – as well as gaining a degree in social anthropology from New Hall (now Murray Edwards College) here in Cambridge and a masters degree in social work. Joan has recently published her third book – ‘Animals Betrayed’ – which has interviews with a number of animal rights activists and campaigners, and gives an insight into many of the issues that have affected animal welfare over the years.
‘Animals Betrayed’ by Joan Court. Paperback, published by Selene Press and priced £12.50 (+£2 p&p). Please phone (01223) 311828 to order your copy.

Luckily you can get your hands on copies of all the above books without ever having to leave Mill Road – happy reading!