As May is Local & Community History Month and this coming weekend is National Mills Weekend, I figured it was about time I learnt more about the mill that gave our road its name…

With my local mill knowledge somewhat lacking (all I knew was that there used to be one somewhere in the Covent Garden area) I thought the best person to ask would be well-known local historian and Romsey resident, Allan Brigham. Allan, a member of the Mill Road History Project, was able to tell me that the mill stood roughly where the Salvation Army shop, Sally Ann’s, now is; and that it was owned by a Mr Humphrey, a local miller/baker, in the 1820’s. In 1830 the mill was one of just a couple of buildings that stood in what is now the Mill Road area, though the arrival of the railway in 1845 eventually resulted in a lot of housing being built to accomodate the railway workers and growing population. Some of the historical records I have found say that the introduction of the railway led to in an increase in local flour-milling – suggesting the mill could have closed quite some time later – though another account says that the windmill wasn’t used after its sails were blown off in 1840. 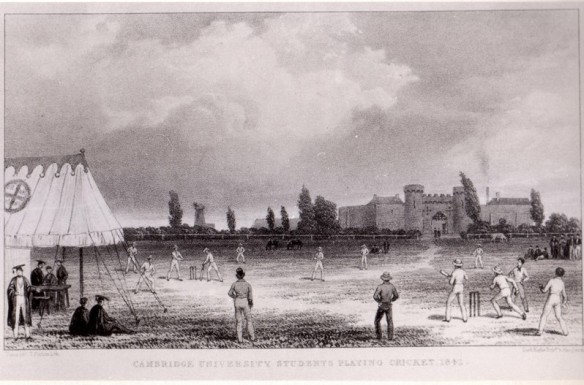 The picture above, courtesy of Allan, shows Cambridge University students playing cricket in 1842, and you can see the Mill in the distant background (it looks as though the sails might not be attached, but it’s difficult to tell). It is the only image I have seen of it, though the Mill Road Cemetery website has an image of Bakers 1830 map – which shows the site of the mill amongst the fields – and I am reliably informed that there are also other maps dating from between 1811 and 1832 available at the county archive. The mill gave its name to Mill Road and also Mill Street – which runs parallel to Mill Road on the southern side and is joined to it by Covent Garden and Mawson Road.

As well as the mill, the site of Sally Ann’s was home to Cambridge’s first supermarket (Fine Fare) which opened in the 1960’s; and home to Cambridge’s first purpose-built cinema (The Playhouse), which opened a hundred years ago. Although the cinema closed in 1956, you can still see the coin marks, names and initials that were carved on the wall by queing cinema-goers – I am not sure if this was seen as vandalism or graffiti at the time, but I think it’s a great visual example of local history and I hope it’s preserved for many years to come.

Although there is no longer a mill here in the Mill Road area, there are still a few in the county and many of them – including Impington Mill, Bourn Mill and Hinxton Watermill – are opening their doors to the public this weekend for National Mills Weekend (the nearest mill I am aware of is Chesterton Mill on Frenchs Road – although it’s not technically a mill anymore as it was converted into office space in 1986, its flour-milling business having closed in 1955). There will also be a history exhibition at Sally Ann’s on Mill Road, from 13th – 25th May, with information and photographs about the history of the Salvation Army building; and I will be going along to see if I can find out any more information about the mill.

I’ll be blogging again about Local & Community HIstory month during May (including more information about the recent history project grant funding!). But for now, it’s time to explore…