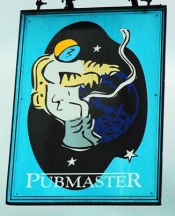 I had originally intended to write this blog article a few months ago and for it to be about our music venues in this part of the City. I was going to lament that although the Boat Race is now long gone and Anglia Ruskin University no longer has a weekly line-up of gigs open to the public, at least we still have the Man On The Moon as a last remaining dedicated medium-sized gig venue. However, it was announced a couple of months ago the the Man On The Moon would be closing at the start of October, and even after protests it sadly did close at the start of this month.

Landlord John and his family moved from the White Hart pub (which became the Back Street Bistro restaurant) on Sturton Street in 2000 to take over at the Man On The Moon, and over the next thirteen years the pub became well known both locally and further afield for its music. They’ve hosted some big names over the years – including Therapy? and Wendy James from Transvision Vamp – as well as regular music nights across all genres including hip-hop, soul and rockabilly and even lindy hop dancing.

The Man On The Moon has now been taken over by new leaseholders and a new landlord has also been chosen. Although they are keen to open the pub again soon, I am not yet sure when this will be (the new landlord has also already taken on another local pub – The Royal Standard, on Mill Road). Following on from its closure there had been a peaceful protest in the form of a community cafe at the Man On The Moon, but that came to an end last week. However, the previous ‘Moon team are still booking gigs at other venues and are planning for the future, so if you want to get in touch with them you can contact them via the details on their website.

Since we’re on the subject of losing music venues, it seems only right that I mention the Boat Race on East Road – which I’m sure many of you will remember. It was a dedicated gig venue that had music seven days a week and was known for hosting up and coming talent – the likes of Franz Ferdinand, Placebo, Oasis and Groove Armada all played there before making it ‘big’ – including local bands and artists such Right Turn Clyde, Ezio and The Broken Family Band. The Boat Race closed almost ten years ago – much to the dismay of local music lovers – and although there were campaigns to save it (and bring it back ) it was sold and eventually became The Snug.

Of course the Portland Arms (and in recent times also the Cornerhouse) put on some great gigs and are well known locally for hosting up and coming bands like Beverley Kills and favourites such as Editors, Akira The Don, Carter USM and Ellie Goulding – but it’s on the other side of town; and besides, a City with a population in excess of 120,000 surely deserves more than one dedicated  medium-sized venue, doesn’t it…? The last year has thankfully seen an increase in gigs happening on and around Mill Road and a number of the local pubs and cafes now have regular music nights. However, the last remaining dedicated medium sized gig venue in this part of the City was the Man On The Moon.

Given the current lack of local music venue and the need for action to make sure our music scene doesn’t suffer any further, there will be a special meeting TONIGHT to talk about making things happen!

The ‘Campaign for a Music Venue’ open meeting will take place at The Hopbine (sister pub to the Portland Arms) from 7:30pm. It’s a public meeting and all are welcome, so if you support the idea of creating/developing a dedicated music venue, you have some ideas on how it could work or you just want to find out more, then make sure you go along tonight.